In our first house on Hamilton Street we had a basement which was divided into two rooms.  In room one was an unfinished something or another, perhaps a bench or maybe a planter.  Visualize a two foot by five feet wall of bricks that make a sharp right turn, stacked up maybe two feet tall. The perfect hiding place for something small.

I attended junior high school then and was a relatively good kid, unlike the "Hoods" we would see walking down the street in our small town, smoking cigarettes and saying naughty words. No, I wasn't like THEM.  During lunchtime, the Hoods would race out to Smokey Oaks, the forbidden woods next to the school, and smoke their cigarettes and do other unspeakable things. The buzzer would ring and you could watch them sprint across the big field, trying to catch their smokey breaths as they hurried to get to fifth period.

This was the 70s. Post hippie. That confused time between the groovy bell-bottomed, love beaded, velvet chokered 60's and the sweet mullet headed, glam band, Jersey haired 80's. I mean where do you go after a generation of free love, what is left to discover? For me, it was Winstons.

Why is it that TV jingles can stick in your mind for decades? I can sing you every cigarette commercial since 1958. As they say nowadays, OMG LMFAO!

"Come out for the Koooooool taste, the Koolest pleasure every time you smoke."

"Winston tastes good like a [uh uh] cigarette should."

It was this last one that got me. Cigarettes looked like they tasted good, my Mom and Dad smoked them (Virginia Slims, Kools, Salem), the Marlboro Man smoked them while riding horses, the Hoods sucked them down like I did Slo Pokes. So when I decided one fall day to try these delicious white sticks of tobacco, there was no hesitation. I would smoke the best tasting cigarette in the world. Winstons. 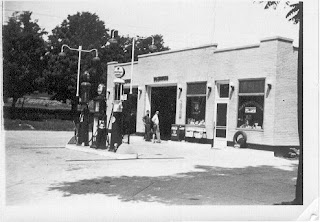 Now, how to get a pack.  Fortunately for me, just one block away was a gas station usually staffed by only one man. Whenever a customer pulled up and the bell rang, he would grab his red mechanics rag, wipe his hands, and walk out to greet his visitor. "Can I check your oil today?" he would ask. He would put the nozzle into the car, lift the hood, and check the oil. Then, he would drop the hood and clean the windshield until it sparkled. The customer would pay him, he would reach into his navy blue, oil stained trousers and pull out a wad of crumbled up bills, and give them their change.  A wave goodbye, and he went back into the station to his cup of coffee, cigarette, and newspaper. 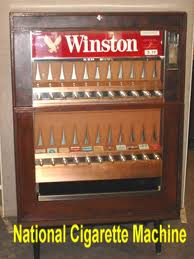 Time from wiping hands to the wave goodbye, 5 minutes, 23 seconds average. Plenty of time for this toe-headed neighbor kid to put 45 cents of her paper route money into the cigarette machine, pull the shiny silver knob, and watch her brand new pack of Winstons drop to the bottom.  Push open flap, grab, place in pocket. Wait for man to start his return into station. Put another 10 cents of paper route money into candy machine, pull shiny silver knob for a Payday, and watch it drop to bottom. Push open flap, grab, tear open wrapper, and eat candy bar loudly to squelch suspicion. Cheerfully say "thanks!", and walk inconspicuously home. Mission accomplished.

Now, where to hide my brand new pack of Winstons. I had two snoopy little sisters, and two snoopy big parents. I know, the brick thingymajigger in the basement. I nonchalantly went downstairs, lifted out a few bricks here and moved a few bricks there, creating a nice little hiding spot. In went the Wintons. Tomorrow would be the day I smoked my first cigarette.

I arose earlier than the rest of the family, and sneaked downstairs to retrieve my new pack of Winstons. I stuck them deep in my coat pocket, ate my breakfast and headed off to school, a good mile away.

Damn, it was harder than I thought, sneaking a smoke on my way to school. Cars kept passing me. My town only had 900 people in it, so everybody knew everybody. "There is Barb Barton," I could imagine them saying. "Look, honey, is that a CIGARETTE she is smoking?". "My word!". Then my Mom and Dad would get a call and I would be grounded for at least two weeks, if not more. But I had no choice. That jingle was playing over and over in my head. "Winston tastes good like a cigarette should".

I made my move. I pulled the brand new pack of Winstons from my coat pocket, took off my mittens, and opened it. Tap tap tap, just like my Dad did. Why do people do that? Anyway, I pulled out my cigarette, put it in my mouth and lit it, hiding all the while behind my very large mittens. Car! Oh, what is that on the ground over there? I pretend to pick up something. They don't suspect. I am safe. I held the cigarette between my lips while putting my mittens back on, then inhaled. The world spinned. I felt, I felt, I felt....dizzy. I coughed. I puked. Winston's didn't taste good, they tasted horrible! What was that commercial talking about?

On my way home from school that day I stopped by the gas station and tossed my Winston's into the trash with the used blue paper towels, empty oil containers, and cigarette butts. I put 10 cents of my paper route money into the pop machine and pushed the button for a Dr. Pepper. I popped the top, tossed the metal ring into the trash next to the Winstons, and walked home, singing.

"Dr. Pepper, so misunderstood, if everyone would try one they would know it tastes good."
Posted by Barb at 8:16 PM