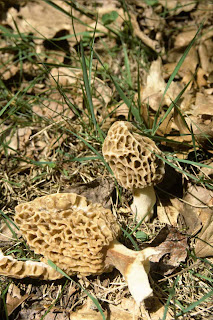 Grandma was at the top of the stairs, greeting me as she always did. Her driveway wound itself around to the backside of "the mound", where I would enter the house through the basement door and walk up the carpeted steps into her loving arms. After a big hug and a kiss, Grandma took my hand and said "Come here, I want to show you something."

Hand in hand we walked through the kitchen, stepped out into the screened-in porch, and exited via the side door. Gravel crunched under Grandma's small, well-worn tennis shoes as she led me to a carefully stacked column of three little pieces of limestone gravel.

"Look what I found," she proudly said.

Beside the tiny monument was a black morel.

Grandma's yard was always full of black morels. Some springs were better than others, but most of the time I could count on them to bring me bliss. I would stand at Grandma's kitchen sink and look out her large picture window, searching the green grass for protruding objects. Past the bird feeding station, down the hill to the old burn pile my eyes would travel. I could pick out morels at 50 yards if the light was right. Grandma mostly ignored them, unless I called her and asked for a report. For some reason, on that day, she went hunting.

Hello, my name is Barb B. and I have MHD.

MHD (Mushroom Hunting Disorder) is an obsessive/complusive disorder yet to be included in the Physicians Desk Reference. Hereditary in nature, it was passed on to me from my parents, who got it from their parents, who got it from their parents. My case seems to be the worst the family has ever seen. Symptoms include sleep disturbance, obsessive thoughts, inability to focus, impaired driving (due to looking for mushrooms while operating vehicle), and compulsive lying. It most commonly occurs in people living in Michigan, although in recent years it has spread to surrounding states. There appears to be two forms of this disorder. Out-of-state residents tend to be obsessed more with profits than mushrooms. Michigan residents are obsessed more with mushrooms. Period.

My disorder begins its cycle in February, when my sleep becomes disturbed by dreams of morels...fields of giant white morels that are the prize of all mushroom hunters. The dreams continue until the trillium appear, at which time I am drawn by some unseen force into the woods. I cannot help myself, I cannot stop myself. I must find mushrooms.


I began to hunt morels when I was knee high to a grasshopper. Since then, I have learned many more species of mushrooms and my obsession lasts until the first snow flies.  Usually the cycle ended at the start of winter and I would have relief for a few months. Now, I have become acquainted with Chaga the birch fungus which can be harvested year around. I have no peace.

It is only March, and already I have been out seeking fungus. I went to my old haunts and there, growing on a dead log, were baby dryad saddles. I pulled out my knife. "No!", I screamed to myself, "Not the children!" I bit my lip and kept walking. Soon, I found some teenage dryad's saddles. The perfect size. Using my mushroom knife, which is characterized by its extremely sharp, curved blade and wooden handle with a compass on the side and a brush on the end, I sliced several of the mushrooms and reverently placed them in my bag. The season had begun.

Now I cannot concentrate. I watch the weather. I worry and get filled with anxiety if I see someone walking in the woods behind my house. Are they looking for morels? I grab my coat and walk as fast as I can to get around them undetected. I go into the woods and crouch low, searching the ground for those rare jewels of spring. If I find mushrooms I will lie to anyone who asks. I will say I did not find anything. Nothing. Nada.

I never lie. Ever.

Except when it comes to mushrooms.

So please forgive me for the next few months if there is a missed blog, a misspelled word, or a dangling participle. Its only because I am staring out my picture window into the grass across the street...
Posted by Barb at 7:41 PM