The Man Killing Clam and Other Roadside Attractions

When planning your summer vacation this year, consider this. Michigan is peppered with some of the most awesome, bizarre, curious roadside attractions in the country. I love them. One of my favorites is a contraption someone set up on the side of a road.  Cars passing by can toss a bottle or can and try to hit a hole that had been cut out of a board, which was propped up between two 50 gallon drums. As long as you hit the board or the hole, your beverage container ends up in the trash can. 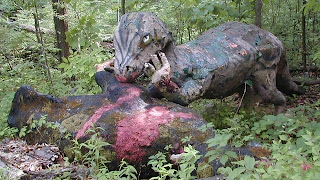 Another favorite is the Prehistoric Village in the Irish Hills, built in 1963. I only discovered this gem back in 2003, four years after it had closed.  Damn! You could take a little train back into the woods, where giant mechanized dinosaurs (sculpted by James Q. Sidwell) would roar at you and fake cave people would be posed as if carrying on their daily life. There was a waterfall, a smoking volcano, and a waterslide. Now, it is an eery abandoned, prehistoric ghost town. You can buy this gem for less than a million bucks. I am on a mission to save it and restore it to its former glory so watch for an upcoming blog on this very special place. 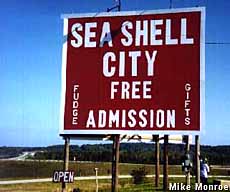 One of the most famous of Michigan's roadside attractions features nothing at all from Michigan. Sea Shell City was created in 1957 before the Interstate was even built. It has thousands of sea shells for visitors to ooohhh and ahhhhh over, and not one of them is from North America. But in the land of snow, it is a refreshing tropical escape, taking us to warmer places. The star of Sea Shell City is the Man Killing Clam.

The Man Killing Clam is placed just outside the men's bathroom. According to the owner, the giant clam does not eat men, it just clamps shut on their feet when they try to steal its body for the dinner table. Of course once the jaws of death are dropped, it is bye bye. Just what is this monstrous bivalve?

The giant clam (Tridacna gigas) is the largest living mollusk and is found in the shallow coral reefs of the Indian Ocean and the South Pacific, and can reach weights of up to 450 pounds. Wow. It is also found in the Philippines (this is where the Man Killing Clam shell reportedly came from) and in the North Sea of China. It is gone from many of its former habitats and the remaining populations are highly endangered. With an average lifespan of 100 years or more, these clams have been over harvested because of their highly prized flesh.

After visiting the Clam, head on up to Mackinac City for some fudge, salt water taffy, and smoked white fish. Sit on the shore of the Straits and imagine the bottom is littered with giant Man Killing Clams, shooting up from the bottom and snatching Yoopers, Trolls, and Fudgies alike, dragging them to the depths of Lake Michigan, never to be seen again.  Delicious.

***Definitions: Straits - water between Upper and Lower Peninsulas of Michigan. Yoopers - people who were born in the Upper Peninsula. Trolls and Fudgies - all people who come up to the north from southern Michigan.
Posted by Barb at 8:28 AM