My mom and dad were golfers when I was growing up. Dad still hits the back 9 every once in awhile. They even convinced me to take golf lessons. I had a set of aquamarine stained woods and the usual clobber clubs. Just wasn't my thing. But they seemed to love it. 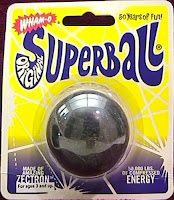 I preferred to used golf balls for something to bounce. Before the Super Ball came on the market, golf balls were queen. They made a sound like a ping pong ball when they hit the pavement and bounced as high as the clouds. You could walk along bouncing a golf ball just like a basketball, but they had a mind of their own and were much trickier to catch.

Ever curious, I began to wonder just what was inside a golf ball that made them bounce. It must be something very powerful because it can bounce really really high even though it has a shell around the bounce material. So I asked my Dad.

"Tightly wound rubber bands," he answered. That made sense to me, rubber bounces right?

One afternoon the Grover kids were sitting on Grandma and Grandpa Roy's porch with me and my sisters and the subject of golf balls came up. "My Dad said golf balls bounce because they have tightly wound rubber bands in them," I proclaimed, a 13 year old know-it-all. "Well, MY Dad says they bounce because they have a hard rubber center!", challenged one of the Grovers. "Nuh-uh," I said. "Uh-huh," he said.

The line was drawn. The Golf Ball War was on. 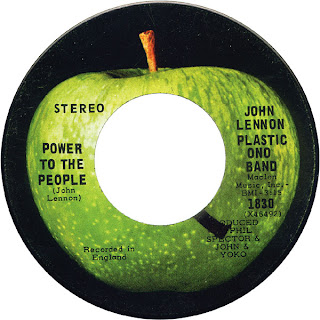 The first thing I did was to write a protest song. John Lennon's song "Power to the People" was a hit then and fit nicely for my cause. I simply changed the lyrics to "Power to the Bartons".  We went back to Grandma and Grandpa Roy's porch and began to sing.

Us kids didn't speak much for the next few weeks, each standing their ground on this most important kid issue. But after awhile I started to miss playing with my friends across the street. A truce was drawn and a golf ball was sawed open. Rigid rubber core, rubber band lining.


The Golf Ball War lasted two weeks. It wasn't about the golf balls, really. It was about loyalty to our families and what we believed to be true. It was also about the inability of children to understand there are different points of view and to accept others beliefs even if they are different from our own. And it also shows how blind faith can bite you in the butt.

You would think we would have learned something since then.
Posted by Barb at 8:32 AM