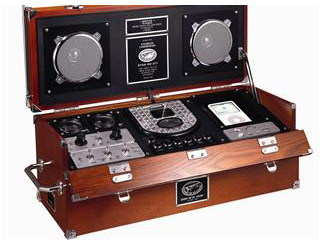 I sat in front of the old WWII radio, headphones on, listening.

"Headquarters, come in, over," I barked into the microphone. "Agent Barton here."

I turned the dials to bring the signal in better. The radio crackled. "Enemy agents have been spotted, take appropriate actions to secure top secret information."

"Roger, headquarters. I will relay to our other agents and check back in at 2200 hours," I responded. "Agent Barton, over and out."

I took off the headphones, shut down the radio, and checked my weapon.  My bright green squirt gun was full, my secret agent ID was safe in my back pocket, my spy glasses were well hidden. I carefully made my way through the cluttered garage, out the back door and up the stairs to the second story deck. My agent team was waiting.

"Ok, here's the deal," I said. "Headquarters has informed me that our enemies have been spotted. Our mission, should we choose to accept it, is to capture and interrogate the enemy in order to identify the location of their headquarters. Any questions?"

Paul raised his hand. "Can I go to the bathroom first?"

We were a tight knit organization called G.L.O.B.E., a name I spent hours creating. The Man from U.N.C.L.E. was my favorite TV show at the time, so to be a bona fide spy organization we had to have an acronym. I picked the name first, then went through pages of the dictionary to find the perfect words to describe our spy club. I settled on Good Livid On Burly Espy.  Sounded good to me at the time.

We posted spies behind bushes on all four corners of the house, waiting for the enemy agents to appear. It wasn't long before they were spotted, stupidly exposing themselves at the ice cream truck.

"Now!" I shouted. Our highly trained G.L.O.B.E. agents descended on the ice cream truck in a flash and managed to capture one of the enemy agents. We took the unwilling captive to our top secret headquarters in the garage, an empty space behind a stack of boxes. I put the headphones on and contacted the higher ups once more.

"Agent Barton here, we have captured an enemy agent and will begin questioning." They were pleased.

We interrogated our prisoner for minutes, trying to find out what top secret information he had.  But we were interrupted by shouts and screams from our guards outside the garage door.

Oh no, not Brownie. The neighbor's giant 6 foot tall blonde Great Dane was known to have bitten every kid on the block at least once. I still have a scar on my hip where Brownie sunk his teeth into me one fine day. The only way to avoid him was to carry pieces of meat with you at all times. When Brownie came running at you, all you could do was throw the meat as far as you could then run like hell.

We released our prisoner and began our race home, trying to avoid the giant Great Dane that seemed to delight in terrorizing the neighborhood kids. Brownie ran after one kid then spun around and chased several more. Finally he trotted home, satisfied he had given us a fright. Fortunately every one made it to safety before becoming Brownie's Saturday afternoon snack.

I slipped back in to headquarters and once again put on the headphones.

"Headquarters, this is Agent Barton," I said, trying to catch my breath. "We have lost our prisoner due to an attack by a 6 foot tall Great Dane. Will resume search tomorrow."

"Roger, Agent Barton. Over and out."

I grabbed a hot dog out of the garage refrigerator and warily made my home, prepared for the flash of blond waiting to dart out of the bushes and consume me.
Posted by Barb at 12:49 PM