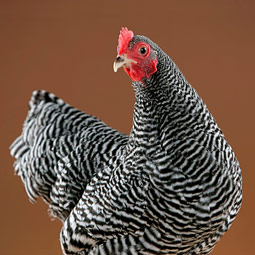 Breakfast is my favorite meal. I eat the same thing every time. Scrambled eggs, bacon, salad. Every time. I stopped at my favorite breakfast joint today, still celebrating my new job. While waiting for my "usual", I read the city's alternative newspaper. In it was a story about the Tour de Coup, a bicycle tour of ten urban chicken coups. How cool was that! I have always wanted chickens, but didn't think my beagle and a flock of feathered intellectuals would play well together. Still, when I read that story, I secretly wished for a chicken.

Now you may find this very hard to believe, but I swear it is true. When I arrived home, I found a chicken in my backyard. I rubbed my eyes and looked again. Tiny, my beagle, was chasing a chicken! I grabbed the dog and put him in the house and went back outside. Sure enough, there was a Barred Rock hen, walking around like chickens do pecking at the ground. A magic chicken! The one I wished for!

I didn't know what to do! My heart was pounding. I have never known a chicken before, well that is not entirely true. Mr. Berry, my neighbor in Three Rivers, had two chickens that he carried around, one under each arm. Reddy and Whitey. I babysat, or chickensat, them once. But all I did was feed them. Anyway, I figured the chicken must have flown the coup somewhere, and it was up to me to find her humans.

I contacted the Allen Neighborhood Association, as they knew everyone in town who were weird enough to have chickens. I was connected to one of the staff members who herself has chickens. She put the word out and it spread like wildfire. "Did you lose a chicken?" was the email's subject line. Lots of LOL, hahahhah, etc.

I went back and reread the article. They mentioned several chicken tenders by name, so I started calling around. I finally reached Chicken Bob. I think Chicken Bob got his name from being the first person in Lansing to have chickens. He also just got a goat and has his bees on the garage roof. Anyway, Chicken Bob gave me some pointers about what to do with the chicken, who I am calling Henny Penny. He told me he would be happy to come over and build me a coup. Or, he could take the chicken and bring her into his flock. We agreed to talk later.

I went to the feed store to get some chicken feed. They were out, but said the chicken would eat cracked corn, so I bought a bag. I was really excited to feed Henny Penny. I watch Grandma do that on the Walton's. And I knew the chicken must be hungry, as the neighbors said Henny Penny had been running the streets since at least yesterday. So I stuck my hand in the bag, grabbed a handful of corn, and tossed it around the ground. Henny Penny came strutting over and started eating! What joy! After feasting on the corn, she went over to the dog bowl I had filled with water and she began to drink. OK. Alright. I can do this chicken thing.

Chicken Bob and I talked later. I told him no one had called yet claiming Henny Penny, although several neighbors said they would take that chicken, with drool running down their chin. He again offered to build me a coup. Chicken Bob said I needed to make a perch for Henny Penny, as she needed to be up off the ground at night to feel safe. We agreed to talk tomorrow and make a decision as to whether he will take Henny Penny or we will build a coup.

I went out to the garage and looked for a suitable perch. There, resting in a corner, was my favorite morel mushroom hiking stick. Perfect. I mounted the hiking stick between two pine patio chairs and secured it with zip strips. Would Henny Penny find it suitable?

The rain was falling, so I knew the chicken would be seeking shelter behind the garage where I have my grill and patio furniture, protected by a metal awning.  I waited an hour then snuck out. I peeked around the corner of the garage, and the magic chicken was sound asleep, perched on the hiking stick!

I am going to ask Chicken Bob if he will be a foster parent to Henny Penny until I figure out how much I will have to travel with my new job. If I think I can do it, I want Henny Penny to live with me and Tiny and the bees. She is the magic chicken that I wished for, after all. And I will get her some friends, because magic chickens should never live alone.

UPDATE: I awoke this morning to crowing. Henny Penny is actually Henry P. Penny. That complicates things. Roosters aren't allowed to live in the city of Lansing. Anyone know any rooster rescues?
Posted by Barb at 9:56 PM