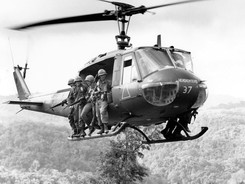 I took my first ride in a helicopter in 1985, when I volunteered with the Alaska Mountain rescue group to help search for a missing backpacker in Denali National Park. The front of the helicopter was a big bubble, giving it the appearance of a giant dragonfly. I sat in the front seat, strapped in with four point restraints and a radio headset placed on my head. We flew through the air at top speed, across the tundra and up over mountains, my stomach dropping right along with the jagged rock below.


My second ride was in a Vietnam-era Huey helicopter back in 1992. I flew with Air National Guard pilots, looking for bald eagle nests and searching for habitat for a rare butterfly.

Every generation has their war. Mine was Vietnam. I grew up with the images of flag draped coffins exiting cargo planes, napalm fire storms washing across the jungle, the protests and arrests. The heartbreak and confusion, the sorrow and the loss. I have known Vietnam veterans, some who have talked about it and some who just want to forget.  I have known a Vietnamese friend whose family got out of Saigon on the very last airlift, her Uncle forging papers to get them to freedom. She was just a baby at the time. When we were friends a couple of decades ago, she had no interest in the Vietnam War, not a shred of curiousity. Perhaps now she does. Our personal stories become more important the older we get.
When I first stepped onto the Huey, I immediately wondered if it had been in the war, clear across the ocean in a land I have never seen. I imagined it carrying troops or wounded soldiers in and out of the jungle. I searched the walls for holes, the floor for blood.
I flew in Hueys probably four or five times. Each pilot was different. One decided to show me how a helicopter would patrol the mountains in time of war. We crept along the ridge, just out of sight, and would pop up occasionally to see what was going on over the ridge. We would zigzag and dart, up and down and around the valley and mountains. I always got sick. “Land, land,” I would try to say into the little microphone, fearing I would lose it right then and there. We would find a clearing and I would take a walk to relieve the churning in my gut.  “It is all in your head, you know“, Donald Trump’s pilot told me. He was a reservist in the Air National Guard. “Your body isn’t really sick, your mind makes you think you are.”  “Right,” I said, between barfs.
“They are going to retire the Hueys,” one pilot told me, sadly. I felt sad, too. I don’t know why. Those army green choppers hold a place in my heart, a chord that attaches me to a little white house in Westerville, Ohio when my parents were still together. They remind me of a time when our nation was confused and at war with itself. I was just a child, but I knew. Everyone knew.
Posted by Barb at 10:02 AM