I am not sure how to prove this, but I think that Homo sapiens (that would be us) has a fatal gene that is silently paving the way for our total and complete destruction. Now I realize this is a very sensational statement, but I will repeat it at the end of this blog and you tell me I'm wrong here, OK?

All animals have instincts, evolved and developed over time to protect us (yes us, we too are animals) from harm. Think fight or flight. Harm used to be saber-toothed tigers or giant bears or warring next door neighbors. Things we could see. It used to be bad meat - tastes bad, spit it out. Immediate response geared toward protecting our life.

But at some point during the rise of present day civilization, a defective gene started to express itself. Humans began to take unprecedented risks that endangered their lives. The kind of risks are the clue to the existence of this now common gene.

When I was a young woman, I tried peppermint schnapps. I had an immediate reaction and ran to the bathroom. I didn't make it to the bathroom, the reaction was so strong and sudden. I never drank peppermint schnapps again. I had a negative physical reaction to something bad for my body and I took action to ensure it didn't happen again, to protect myself. Even bringing this unpleasant memory up to the surface makes me want to hurl. My body is protecting me even today.

Enter defective gene expression. Everyone knows cigarettes can and do cause cancer, emphysema, asthma, and other serious health issues. Yet we smoke them. Why? The defective gene blocks that critical connection in our brain that links the action we are taking to the consequences. Our body seems to require visceral confirmation of the potential harm of a substance before our brain will engage in stopping the behavior. For instance, if our skin turned green and nasty sores appeared on our skin every time we smoked a cigarette, do you think we would keep smoking? We seem to need immediate consequences for us to protect ourselves from harm. We smoke but don't suffer the health consequences until decades later. We eat junk food all our lives and slowly become obese, have diabetes or heart disease. It is the slow process of it all that kills us. We don't see it coming. We know it, but that doesn't matter. The defective gene keeps us from taking action.

This defective gene is also affecting the health of our communities and nation. How, you might ask? Let me explain.

Yesterday, I received a letter in the mail from the Unemployment Office. There was a new law passed that now requires me to fill out a form verifying that I have applied for at least two jobs every week. I must take this form to the Michigan Works Office or go online and file it every two weeks BEFORE I file for my benefits. Otherwise, I will not get any money. I have no issue with this, other than it is an annoyance for me and one more piece of poverty paper I have to fill out. But what struck me about this was that 1) I never heard about this new law, and 2) I have been directly affected by this new law in a tangible way. A kind of wake up call, if you will. I am responding. I am writing this blog. And I am dutifully filling out the form.

Perhaps this defective gene is the cause for apathy in our society. If it doesn't directly and tangibly affect us, we ignore it. Meanwhile, all kinds of laws are being passed, wars are being fought, corruption is occurring right under our noses. We ignore it. It doesn't directly affect us. But just like with smoking, our collective lungs are filling with black tar and we will soon be gasping for breath. 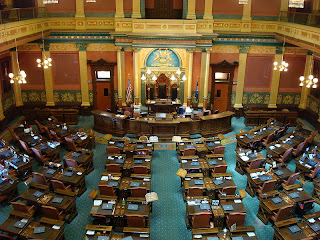 There is something going on in Michigan that I would bet most citizens have not heard about. It involves the deconstruction of democracy in our fine state by the Republican majority and Governor. The Michigan Democrats have sued the Michigan Republicans for the right to vote. What? The Republicans are ignoring parts of Michigan's Constitution in order to put laws which further their agenda into immediate affect.

When laws are passed in Michigan, they go into affect 90 days after the end of the current legislative session. A clause was put in place as part of the original bill to allow for them to take Immediate Affect should an emergency situation arise (war, natural disaster, etc), but it would require a 2/3 majority of the vote for it to happen. The Republican majority has been using this Immediate Affect clause on 96% of the bills they have been passing. Not only is there no real emergency, there is also no 2/3 majority. Democrats ask for a roll-call vote and the Republicans ignore them. Hence the lawsuit by the Democrats.

How does this make you feel? Do you want to run to the bathroom, are you shrugging your shoulders and saying, "who cares?", are you mad as hell? This is where our defective gene can contribute to the degradation of democracy. If we don't react and respond now, democracy is in trouble.

Thanks to Rachel Maddow for repeatedly calling attention to Michigan on national television. She is incensed at what is happening to democracy here. Watch her segment on the attack on democracy in Michigan. It may shock you.
I think that Homo sapiens (that would be us) has a fatal gene that is silently paving the way for our total and complete destruction. Now I realize this is a very sensational statement, but I am repeating it at the end of this blog. You tell me I'm wrong here, OK?
Posted by Barb at 8:01 AM