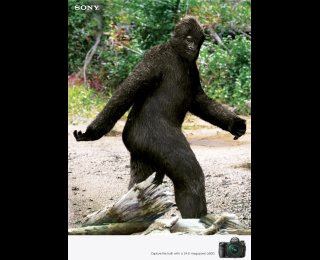 Every small town has its legends.  Ours was no different.  Here, then, is the tale of the Mullen Road Monsters.

Way out in the country, down a long dirt road, is a swamp.  This swamp is not unlike any other swamp, with one exception.  It is the home to the Mullen Road Monsters, seven feet tall, hairy beasts that have remained undetected for hundreds, maybe thousands of years. Undetected, except by the locals who have seen the evidence, caught a glimpse, felt the fear.

I decided to travel out into the country to find Mullen Road and verify the reports I had collected from my peers, other small town residents, and the Ouija board.  It seems there was a house trailer located at the edge of the swamp that had been visited by the Mullen Road Monsters.  Their 1960's Volkswagen Beetle had been picked up, taken to the far end of their circle drive, and turned upside down.  As if that wasn't bad enough, the Monsters had also pummeled the side of the trailer with their fists.

A second report stated that every home located in the area had large street lights strategically placed in their yards, apparently to scare off the Monsters in the dark.

The third piece of information, which led me to believe in conspiracy theories, was that every resident around the swamp had taken photographs of these secretive beasts, but that the United States Air Force had come in and confiscated them all.  This was most intriguing to me.

As the Mullen Road Monsters were known only to come out at night, I had no choice but to travel into the darkness one small town Saturday night.  With one friend to witness what I hoped would be verification of these distant cousins of Bigfoot, we jumped into my Chevy Camero and headed north into the backwoods and swamps of Southwest Michigan.

I turned down Mullen Road, gravel crunching under the tires.  Off in the distance I could see street lights glowing from the edges of the swamp.  It wasn't long before there appeared on the right a house trailer with a circle drive.  And big dents all over the side of it, the size of large fists.  And at the end of the drive, a Volkswagen Beetle.  I took a big gulp.

Slowly my tan Camero crept down the long hill, approaching the swamp.  The old dirt road had been put down right smack through the center of it many years before.  Maybe that is why the Mullen Road Monsters were a bit unhappy.  Anyway, I let the car roll in neutral to a natural stopping point, pushed in the knobs that extinguished the headlights, and turned off the engine.  We waited.

Now unless you have had the experience of sitting in the middle of a swamp in the middle of a moonlit night in the middle of nowhere with nothing but your paranoid thoughts to keep you company, you may not be able to appreciate the level of fear that seeped into our hearts.  I never really stopped to think about what we would do when that seven foot tall hairy beast would appear, perhaps to tip my Camero over with us in it.  But I was determined to once and for all put some truth to the stories of the Mullen Road Monsters.

Twenty-eight long minutes passed with nothing but the sound of frogs drifting from the swamp.  Then they stopped.  Just like that.  Silence.  We went on high alert.

Somewhere in the swamp I heard a twig snap, a rustle in the bushes, a splash.  Then silence.

Were they watching us?  Were they about to pick the Camero up by the rear bumper and run it into the deep muck, where we would never be heard from again?  I began to tremble, I began to shake, I could take it no more.  I started the Camero up, shoved it into first, and threw dirt as we barreled down that old country road faster than a flea on a dog's belly.

The next morning I inspected my car.  There, on the back fender, was a muddy hand print and a strand of long, brown hair.

I never went down that road again.
Posted by Barb at 11:42 AM